Skip to content
Michelle McLane and Gina Pottenger
Monday, April 10, 2017
Khunjar’s mother always wanted her daughter to go into Christian ministry. But her mother died before she could see her dream come true.
Khunjar (right in photo) had been preparing for full-time ministry. She had graduated from a Bible college and a discipleship training program in her home town in the Shan State, Myanmar. But then, three years ago, Khunjar and her family immigrated to Bangkok, Thailand, to look for work.
“My mom always prayed for me,” Khunjar said. “She always encouraged me to stop working and work for ministry.”
Then, in 2015, her mom died in a car accident. Khunjar was helpless to deal with this case in a foreign land. 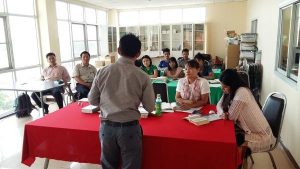 Bill and Mill Kwon, who are Nazarene leaders in Thailand, came to know her during this hard time in her life. Khunjar began assisting in the Kwons’ ministries by translating for and connecting them to other Myanmar migrant workers in the Bangkok area. During six months of their ministry, four house churches were born.
In this period, Khunjar realized the calling of the Lord.
“When my mom passed away, God reminded me of her prayer,” she said. “It is not by chance to be involved in this ministry in Thailand, but the leading of the Lord.”
On January 2016, Khunjar received her first Nazarene minister’s district license from the Myanmar District and transferred her license to the Thailand District. A district license is a recognition from the Nazarene district’s leadership that a person is following God’s call by serving in pastoral ministry.
Her house church has grown, and to gain more space it rented a three-story building in Bangchalong area. In walking distance, there are thousands of Myanmar migrant workers and their families. Pastor Khunjar and her church have a passion to reach the non-Christian population in Bangkok. The church now opens nursery and kindergarten for the Myanmar children.
Throughout Thailand, where the Kwons are based, the Myanmar church is exploding with the same church multiplication that follows the spread of Myanmar Christians around the world. As the Kwons became associated with the Myanmar immigrants in Thailand, they discovered that Myanmar immigrants are also planting churches in Singapore, across Asia and now in the West.

Myanmar’s population is nearly 90 percent Buddhist; just 6 percent identify as Christian. Yet, because of the work of Christian missionaries who first came to Myanmar’s Chin state in the 1800s, today the majority of the Chin people, an ethnic minority group, are Christian.
They have paid a price for their belief.  The BBC and Human Rights Watch report that the Chin are Myanmar’s most persecuted people group.
“The major reasons for their diasporic movement is: 1. Economic, 2. Safety, 3. Religious freedom,” said Bill, who also serves as the superintendent of the Myanmar District.
When Christians leave Myanmar for economic or other reasons, they often choose new homes where they can safely practice their faith.

“Wherever they go they naturally start churches because that’s part of their life,” said Ray McCrary, pastor of a Nazarene church in south Indianapolis, where more than 15,000 Chin immigrants live. His American congregation is partnering with a local Myanmar Chin church, and he meets weekly for discipleship with its pastor, who came to the United States as a refugee (read the story).
“Just as the early Christians were dispersed from Jerusalem, it became natural to start churches and reach out to their friends,” McCrary added.
The Nazarene church in Myanmar itself has declared a new mission: “Reaching Myanmar People for Christ in the NATIONS,” wherever they might be, Bill said.
In response to this clear church planting movement, the Southeast Asia Nazarene Bible College (SEANBC) started a Myanmar course of study in Bangkok with 28 students registered.
Bill opened an SEANBC extension center in Khunjar’s church, which trains Myanmar migrant workers as disciples. Currently there are eight Myanmar migrant workers who received a district license from the Thailand District.

The Nazarene theological course of study, which prepares ministers around the world for ordination, has been translated into Burmese, one of four majority languages of Myanmar, and there are plans for electronic courses of study through SEANBC to reach Chin and other Myanmar ethnic ministers in training around the world, including the United States.
In addition the Chin congregation that is sharing space and fellowship with Southside Church of the Nazarene in Indianapolis, several other Nazarene churches in the U.S. are becoming aware of local congregations of Myanmar immigrants and seeking ways to support them.
Pastor Steve Rhoades, of The Point Church of the Nazarene in Greenwood, outside of Indianapolis, Indiana, discovered the concentration of Myanmar immigrants in his community and has sought them out.
In some cases, there were churches in his community with as many as 70 people meeting in homes for worship. The Point offered its building to them and arranged a plot for gardening, one of the activities that Chin people enjoy and excel at. They also recognized their accomplished music skills through listening to their worship services.

Rhoades has also helped to network local Nazarene churches with Myanmar Nazarene groups in Texas, Oklahoma, Kentucky, Georgia and Colorado. Several Myanmar congregations in other states are in discussion with local Nazarene leaders about joining the denomination, he said.
Established Nazarenes have the opportunity to help connect diaspora communities and assist them in starting churches. As ethnic groups gather together in churches, they are able to share their joys and struggles and encourage one another.
“The opportunities are great,” Bill said. “People are responding, people are opening their homes for prayer. This opportunity is hard to find in their motherland. Diaspora is a great opportunity for gospel. We need to both reach unreached Myanmar communities in Thailand, and train migrant Christian workers as disciples to reach their own people in Thailand.”