April marks the new year in most South Asia and Southeast Asian countries. While most of Thailand, where Southeast Asia Nazarene Bible College’s main campus is located, celebrates the new year through the Songkran Festival, the college decided to celebrate things differently.
During the Sonkgran break, the Myanmar campus offered a class called Introduction to the New Testament as part of an extension program headed by Professor Peter Lalpek Mawia. 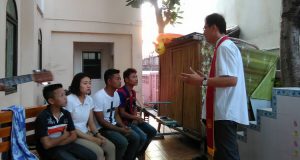 “The program is very unique because it is intended to train and educate lay and bivocational pastors in reaching the Burmese for Christ in Thailand,” said Bill Kwon, SEANBC chancellor. “The class had 14 students, with varying educational levels, ages, and genders all having one thing in common: their heart for Christ!”
The class also paved the way for changed lives. During the class, four students expressed their desire to follow Christ and to be baptized.
Kwon officiated the baptism service.
“After the baptism, Win Win, one of the candidates, testified to be a disciple of Christ to begin her ministry in Bangkok,” Kwon said. “She is now actively engaged in house church planting. It is such a blessing to have a leader with a vision to reach the immigrant population for the Lord.”
The Songkran Festival is also a time for salvation camps where Christians share the gospel through evangelism and the teaching of basic Christian beliefs. Nazarene churches are actively engaged in offering salvation camps in Yangon and other parts of Myanmar.
“Through these efforts, many new souls are saved for the Lord,” Kwon said.
—Church of the Nazarene Asia-Pacific Region